ON or OFF - Something about HDCP

What is HDCP ? Audiovisual content, including movies and TV, is increasingly disseminated in digital form on the Web, as well as on physical media. As a result, content providers are using various content protection technologies to prevent unauthorized uses. High-bandwidth Digital Content Protection (HDCP) protects the last stage in the distribution process, encrypting content transmitted over digital interfaces from set-top boxes, DVD players, personal computers and game consoles, to display devices such as high definition TVs. The consumer electronics industry has rapidly adopted HDCP for the High-Definition Multimedia Interface (HDMI).

HDCP-protected systems may include three types of devices: sources, sinks and repeaters. HDCP protects data as it is transmitted between each of these devices when they are connected via HDMI or other HDCP-protected digital interfaces.

HDCP versions ranges from 1.0 to 2.2. HDCP 2.2 versions are not backwards compatible due to security and hacking risks. In general all packaged and digital premium 4K content released after 2015 will be encrypted with HDCP version 2.2.

If you anticipate playback through your system, display interfaces and signal management equipment they will need to be compliant with version 2.2 at every interface.

Some displays don’t have the option to support HDCP, so would normally be excluded from being choosen in a this situation.

Club 3D delivers several DVI Adapters with the option HDCP -ON or -OFF for example to support the Apple Cinema Displays (which don’t support HDCP).

The simple way to get the correct adapter with: HDCP-ON or OFF 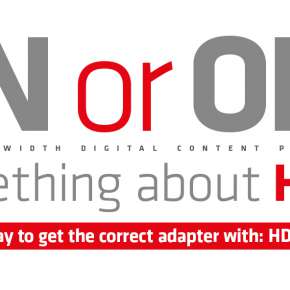 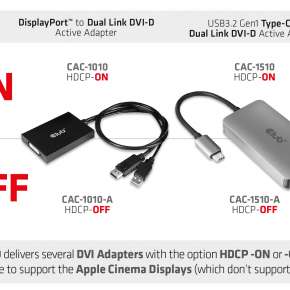